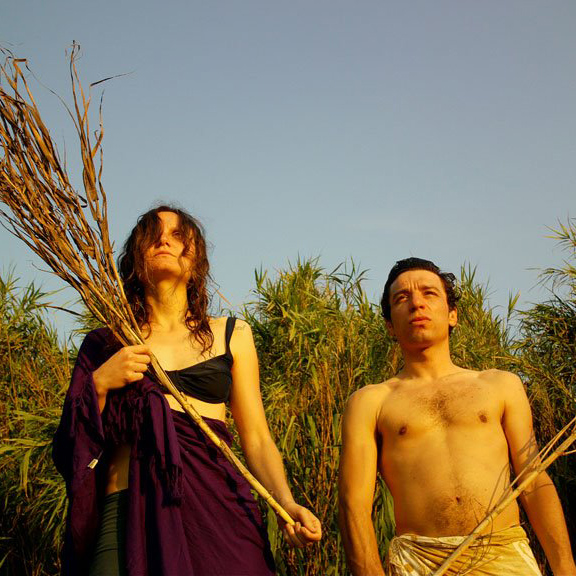 Cascao & Lady Maru are a no wave/electro duo emerging from the no-wave/punk scene of the aethernal Rome. Their new album Spleenism was announced today for a September 18th release date on Cochon Records. The album combines pop elements and tribal funk rhythms among an atmosphere that veers dark.

“We’ve been trying to minimize arrangements, using mainly mostly analog instruments,” Lady Maru says. “This way it can be easier to play the songs live without needing prerecorded phrases, and it allows us to have a more percussive and organic way of developing melodies. Spleenism is a selection of the songs we wrote in the last two years that kind of showcase this style.”

Cascao works as a sound engeneer, a producer and a theater actor, and has been playing in various no-wave, post punk, noise and electronic projects of the freaky Roman underground scene, whereas Lady Maru is a techno and house DJ who has been touring around with her no wave bands like Dada Swing, Trouble vs Glue, and others. They started their work together in 2008, evolving their partnership into a head-turning live act, with guitar, synth, some live samples and percussion, brought together with poppy, arty melodies. They aren’t shy to evoke the influence of Talking Heads, The Residents, and the proto 70s and 80s no-wave eras.

During their first European tour in Berlin, they met Khan of I Am Single Records, who released their first two singles “Tropical Tasting ” and “Burundance” with remixes by Khan, Rodion, Vinny Villbass, Ikuo, in addition to their first full-length album Gong, which was co-produced and mixed by Rodion (Gomma Records). Additional singles were releases on Rome-based electro-house label Glamnight Records as well. In 2014, they released four tracks on an Italian electronic label I-Electronix. As for the new goods, Big Shot Magazine describes “This Boat” as “A cut that morphs funk and electro into an urgent hybrid, their jam cuts like a hot knife through butter.”